Moon shadow over the sea

The total solar eclipse on 26 February 1998 in Pointe Noire, Guadeloupe 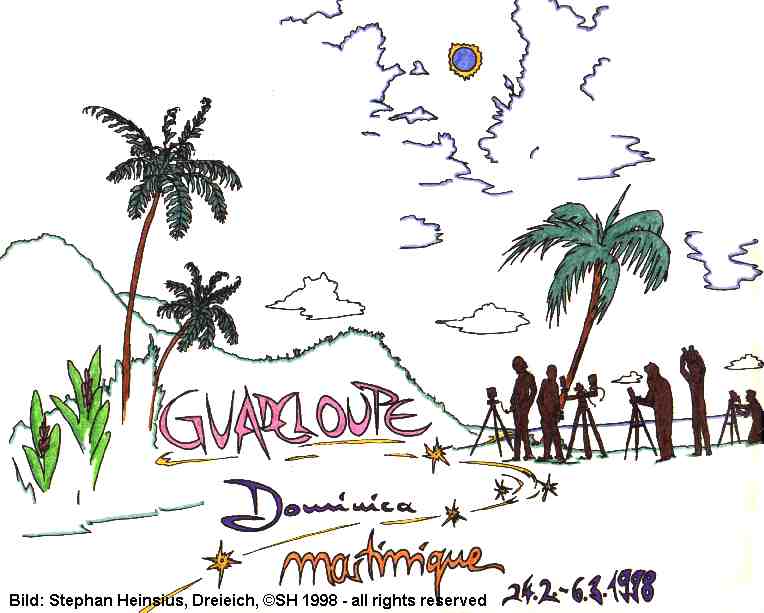 With the search for a beautiful warm and sunny resort for the winter 1997/1998 the idea came to me to combine the vacation with the experience of a total solar eclipse. I had found out somehow that in February 1998 such takes place in the Caribbean or in the north of South America.

Some Surfs in the Internet did not only provide me then the information, where the solar eclipse would be visible, but even also offers of journeys particularly for the observation of the total solar eclipse. I contacted one the tour operators and booked in November the journey with Komet Reisen / GeBeCo to Guadeloupe, Dominica and Martinique, in which the totality should have to be experienced in Guadeloupe.

After a 16-hours journey (long waiting period at transferring in Paris) and a few days of acclimatizing the day of the eclipse had come now on 26 February. Still on the day before - against expectations to the weather in the Caribbean - it was cloudy and rainy, but at the morning before the eclipse, which was announced for the afternoon, the sky showed up already much more friendly. Light clouds decorated the Caribbean sky.

At the morning of 26. February the travel group of 11 participants drove with the touring bus to the north point from Guadeloupe, where the totality should last longest with a duration of 3 minutes. We had tickets for an area reserved particularly for eclipse observers. Arrived there, we looked around for good observation places. There were active goings-on of people between the roadside and the sparse bushy country, which seemed unsuitable for setting up the observation instruments due to the vegetation. A television team had furnished an open-air-studio.

We looked around for a while. Cloud conditions were examined critically. By the majority the group decided then not to remain here but to drive to the west coast of the island. Mountains there were visible and behind them a cloudless sky. This was confirmed by the travel chief, who called someone there. The cumulus clouds over the mountains were estimated as the smaller risk than the higher and lighter clouds, which seemed to consolidate themselves from the sea.

Now we drove about 1 3/4 hour to the west coast. Active motor traffic came to meet us. Some people were already underway with eclipse t-shirts. In many places telescopes and cameras were setup. The drive through the mountains was very beautiful, a marvelous ample plant world showed up there, in particular whole forests of tree ferns.

We drove to the coast down to the beach of Pointe Noire. There were nearly no people. We were the only ones, who setup their instruments here. The setup was not finally completed, when the first contact around 13:07 had been announced by someone of the travel group.

I had selected myself a nice site directly at the beach, so far in front that I had free view to the sea and the horizon, but sufficient far in the back that no water could come to me.

Short cloud interruptions on the view of the partially eclipsed sun were not a problem. Like during the last solar eclipse at home on 12. October 1996 the light became more pale and blunter than that of the uneclipsed sun. This effect continued to increase. It was like grey masked air, however it was clear. The wind, which had blown so far from the sea, became weaker. Probably around 14:24 (local time) the solar crescent was covered by a large cloud, which had separated from northeast coming from the mountains. At the mountains were pieces of blue sky, but before totality (only 6 minutes left) so briefly it became evident that the progress plan, which I had defined for photographing was no longer feasible.

Because the way for the sun to the free sky was still so far, I decided, to equip the video camera with wide angle instead of the tele converter and arranged it as it already was in action, away from the cloud to the sea, in order to capture the approaching moon shadow. Also at the photo camera I replaced the tele lens by a wide angle lens (Canon 24-85mm). The call of the second contact by a group member appeared to me too early. It was clearly darker, but also the thick cloud was in front of the sun. Then this cloud became suddenly became darker than each thundercloud, really black. And suddenly it was so dark that the free sky over the horizon now shone in all dawn colors. Black clouds delivered a magnificent contrast in addition. The sea noise was still there, but the sea had become black, the wind expired and it seemed even a breath of humidity came from above.

I took two wide-angle photographs by free hand, because I did not want to give up yet the tripod adjusted to the sun. The auto-exposure mechanism selected an exposure time, which appeared so long to me, so that I feared that the photographs were blurred (the later results showed nevertheless that one of the two pictures had succeeded, see above).

Suddenly the black cloud showed dissolution features. And now fast again the tele lens back onto the camera again, and the camera to be mounted on the tripod, to fetch the sun again. For free hand photographs the image of the totally eclipsed sun seemed too risky to me. The free sky moved closer and closer. Now to find the focus again in the darkness… Valuable seconds passed, when I tilted the tripod, in order to focus on the horizon.

The cloud seemed to have decayed now on the island side and briefly before the dissolution, and there came - a joyful proclamation of the people standing around - the small fine wreath of the eclipsed sun, still covered by thin cloud parts, but visible: The corona!

I adjusted the display range to 150mm (75mm with 2x tele converter) and took an image with the planet, to that could be seen to the left above the sun - that would have to be Jupiter (it turned out later that it was Mercury).

With 600mm I took several photographs with exposure times of several seconds. Now I wanted to set a manual short exposure time, but then it became bright. A view to the sun showed already a sausage at the lower left, that over-dazzled the corona within seconds and awaked to a glistening beam. That was already too bright to continue watching. The sun was now completely free of clouds, and I pressed the camera trigger again, and again and again,…

A few minutes the small crescent could still be seen, before it disappeared in further clouds. Now the second partial phase was quite uninteresting. It was bgight like day again, and before time was so short, and these fantastic impressions… And it was so short, so very short and so beautiful, so overwhelming fascinating, you have to see that longer, in order to experience it!

At the end of the partial phase the sun was free of clouds for a long time. After taking the last picture I went barefoot into the surge, into that surge of the sea, over which the moon shadow carried out its marvelous spectacle, which had overwhelmed us all in such a way. And on the return trip in the bus I thought again and again of the picture of this fine shining white wreath, which came out of the black cloud.

In the evening we watched our videos on a hotel room. Onehas succeeded to film the corona. My video pictures of the moon shadow over the sea has also become nice, only the whole beauty of the colors did not become effective, since the auto-exposure mechanism of the video camera overexposed the sky.

The photo yield was altogether good. Arrived at home later we dispatched ourselves the results mutually. Thus the yield of the group altogether became better for all, and one already thought of 11. August 1999, when the total solar eclipse comes to us.