Dark shower in the moon rain 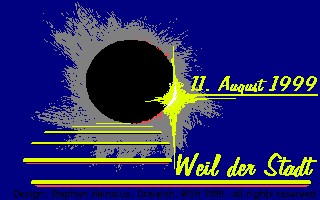 Fascinated of experiencing the total solar eclipse of 1998 in the Caribbean I chose the birth place of the astronomer Johannes Kepler, again to enjoy and deepen the view into the total eclipsed sun on August 11th 1999. Viewing the black sun on February 26th 1998 in Guadeloupe left the feeling, not to have been able to see everything in it precisely enough.

I have known Weil der Stadt since 1987, visiting friends of mine there from time to time. I had realized that this place often was the first one to have clear skies after having had heavy clouds or rain coming through with northern or western winds.

On Saturday (7th) evening I drove from my home town Dreieich, which lies about 20 km south of Frankfurt (Main) to my friends in Weil der Stadt, about 40 km west of Stuttgart. I arrived at dawn. It was a clear warm summer evening.

All three days before eclipse day (8th, 9th, 10th) the sky was beautifully clear on time of totality 12:32-12:34 local time, although the nights, mornings and evenings often had covered sky or even rain.

Using laptop and internet I loaded down satellite pictures. Every day it was quite unsure whether sun would be shining or clouds would be there from 12:32 to 12:34.

At the evening of 10th and even at early morning of 11th I was confident to have a clear view on totality. Due to my optimism the rain on Wednesday morning didn't make me nervous yet. I woke up early that morning to pack my car and drive to the observation site, a hill west of the town with a view to the historical city and the landscape of northern parts of Schwarzwald (black forest). Before leaving I installed another video camera recording the observation site from the balcony of my friends' house.

I had invited friends and relatives (as many as possible) to share this beautiful event with me and used the unique opportunity of having the eclipse at home. One year before the eclipse I decided to meet on that hill near Weil der Stadt. I'd expected about 40 people to come.

At 9:30 I sat in my car parking at a small street on the hill. Still it was raining. Traffic messages on the radio were absolutely extreme: traffic jam on all highways leading into the area of totality. My first friends arrived at 10. They came from Mannheim (about 90 km) and had left about 8. One Group from Dreieich came half an hour later. They left at 6:30 and made their 180 km in 3 hours. The other group from Dreieich who left at 8 didn't make it. They were stuck at Heidelberg (Neckarsteinach) and saw the 99% partial eclipse there.

At 10 the rain stopped and sky went clearer, but humidity was still high. I installed my equipment including the plastic covers to protect it against sudden rain, still having been possible.

At 11 I had to realize that weather conditions would change my original plans. Clouds covered the sun again and first contact at 11:12:54 was not to be seen from us. About half an hour later the sun could be seen behind the clouds and we saw the crescent for about 15 to 20 minutes. Some photos were taken and also some video recordings, but not without the sound of rain drops clicking on the filter foil in front of the lenses.

Time went on and totality was about 20 minutes away, when a deep dark rain front appeared behind our hill, moving towards us. And there was almost no wind that would blow it to another direction.

Some other people who were not part of my group had come and stood on the hill. But instead of using their eclipse glasses people used their umbrellas! Rain began again and with growing darkness intensity increased. 10 minutes before second contact at 12:32:30 last hope vanished and I took my Canon camera with 24mm wide angle lens and my Sony video camera (changed tele lens to wide angle lens) to take pictures of the beginning darkness. After second contact rain intensity accelerated. Masses of water covered us and I had to push water out of my face. I think I was the only one using a camera instead of an umbrella. About 20 seconds before third contact (12:34:48) my video camera gave up due to the rain that had now entered the electronics inside.

Totality was a lot darker than in Guadeloupe (due to the clouds?!). Little colors could be seen in the northwest: like a yellow/orange/green mix. The rest was really black, some streetlights of the town and some photo flashes from the hills on the other side of town.

With third contact darkness went, but raining continued. There was no passing shadow. The daylight came just like opening the aperture of a video camera.

It was raining for about one more hour. With the ending of the rain a little bit blue sky came up and the last question was if we could see fourth contact. I freed my Celestron carefully. Lots of water had gathered on the plastic foils that had successfully protected the telescopes. At 13:53 I could start my photos using the Celestron C5 and got fourth contact in focus. I saw the moon at least until 13:56:20. Predicted fourth contact was at 13:56:29. All my guests had gone, only the group from Berlin saw the fourth contact with me, then helping me packing things back into my car.

The afternoon and the next day I had to dry my equipment. Fortunately my video camera came back to function on Thursday, and I have been able to see my pictures. I drove back home on Friday.

I think one reason for my wrong weather predictions could have been the eclipse itself. The shadow of the moon cooling the air was pressing water out of the clouds like the squeeze of a sponge.

It was an impressing event, having taken a dark shower in the moon rain of the eclipse of August 11th, 1999.

But if I want to see the corona again, I think I should take a ship to the Atlantic ocean that goes to a place where all water is only below myself, on 21. June 2001.

Weil der Stadt, 11. August 1999 (German version written down the evening after the eclipse, translated into English some days later).